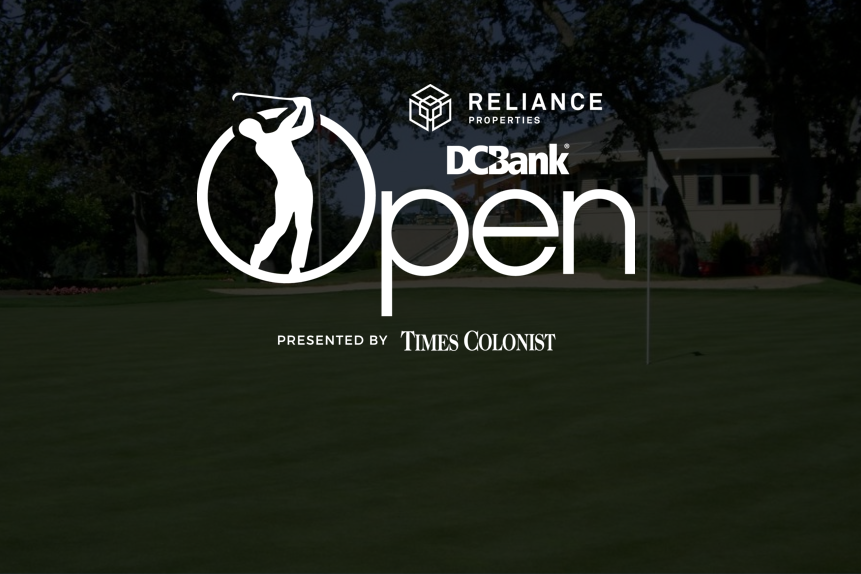 Victoria, BC – Reliance Properties has joined DCBank as the co-title sponsor of the Victoria Open, securing the professional sporting event for three years. The newly named Reliance Properties DCBank Open is part of the Mackenzie Tour - PGA TOUR Canada and marks its 40th year in Victoria. It will be held at Uplands Golf Club from September 26 to October 3.

“Reliance Properties shares our vision in wanting to make a positive impact in the community, and we are delighted to have them join as co-title sponsor,” said Bruce Hallsor, tournament chair.

“We are pleased to share the title partnership of this world-class event with Reliance Properties,” said Jeff Smith, president and CEO of DCBank.

“As Presenting Sponsors we are absolutely delighted to welcome Reliance Properties to the tournament and so proud to call it the Reliance Properties DCBank Open. Congratulations for taking this step and we looking forward to the years ahead” said Peter Baillie, Advertising Director of the Times Colonist.

Family-owned Reliance Properties was established more than 60 years ago and is known for its extensive ownership, leadership, and rehabilitation of heritage buildings in Western Canada. The company has been active in Victoria for more than 10 years. Its notable projects include The Janion, The Fairfield Block, and the Board of Trade Building. Reliance also has several other sites in the city, including Northern Junk, 780 Blanshard, and the seven-acre Capital Iron lands and historic buildings.

“We are known to be long-term participants in the communities in which we build,” said Jon Stovell, president and CEO or Reliance Properties. “We are thrilled to help the Victoria Open continue as a community event for the foreseeable future. It puts Victoria on an international stage and boosts the local economy, which is desperately needed right now due to the pandemic.”

The Victoria Open is the most significant annual professional sporting event on Vancouver Island, bringing world-class golfers to the city and attracting spectators from outside of Victoria.

“Whether it is hotel bookings or spending money at local businesses, the Reliance Properties DCBank Open will benefit the local economy, something that is welcome right now,” said Hallsor.

“The Mackenzie Tour event has had a significant impact in Victoria for many years and having Reliance Properties step up to co-title with DCBank is only going to make the event stronger and the benefit to community greater,” said Scott Pritchard, executive director of the Mackenzie Tour.

“We’re excited and extremely grateful to be the charitable community partner for the Reliance Properties DCBank Open,” said Patricia Mamic, Salvation Army spokesperson. “This partnership will provide us with the means to continue supporting vulnerable individuals and families in Victoria. We can take every dollar and leverage that into two or three dollars, which will go directly to provide food, clothing, and shelter, while helping others escape violence and addiction. We want to thank Reliance Properties, DCBank, and everyone involved.”

“Reliance is particularly motivated to contribute to the Victoria Open because of the charitable partnership with the Salvation Army,” said Stovell. “Our partnership supports the charity’s efforts to help vulnerable and drug-addicted people living on the streets, including a recently opened live-in addictions recovery program for local men. The Salvation Army is also one of our direct neighbours at our Northern Junk site, so we feel it our duty to support our neighbours and their meaningful initiatives.”

The tournament boasts a long list of accomplished participants, including Steve Stricker who earned his first professional win in Victoria. Past participants include BC natives Adam Hadwin, Roger Sloan and Nick Taylor, as well Graham DeLaet and Tony Finau, all of whom are PGA TOUR members.

The Mackenzie Tour has helped propel the careers of many players. That list includes 2019 runner up Doc Redmond who is currently enjoying success on the PGA TOUR, as well as 2019 Champion, Paul Barjon, who recently earned PGA TOUR status for the 2021 - 2022 season via the Korn Ferry Tour.