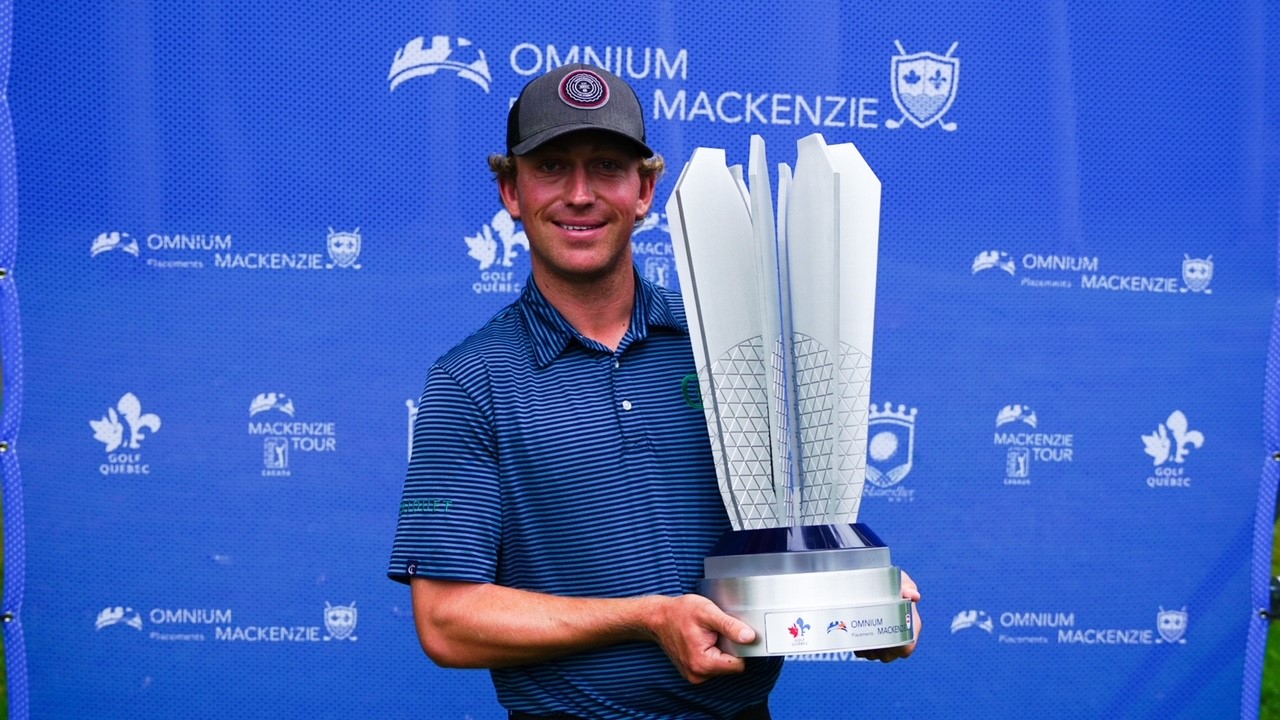 BLAINVILLE, Quebec—Brendan Leonard began the day tied for third, five shots off the lead but the Cambridge, Ontario native made some clutch birdies on Sunday to win the Mackenzie Investments Open, the first tournament on the 2021 Mackenzie Tour – PGA TOUR Canada schedule.

“It feels awesome,” said Leonard. “It was a grind out there today but I just stuck to what I’ve been doing all week and ended up coming out on top.”

Tied for the lead with two holes to play, Leonard saved the best for last, closing out with back-to-back birdies on 17 and 18 to seal the deal. His approach on 18 ended up within 5 feet of the pin putting an exclamation point on his 2-stroke victory.

“That’s why we’re all out here,” said Leonard. “You want to come out here, you want to perform and under the gun you want to pull off the shots. That’s what I kept telling myself is just commit to this and get it done and luckily I was able to come away with it.”

Mississauga, Ontario’s Sudarshan Yellamaraju charged up the leaderboard on Sunday vaulting all the way from a tie for 10th to a tie for 3rd at 7-under. In fact, when he finished his round he was briefly tied for the lead before Leonard’s heroics.

“I definitely expected that I could play well,” said Yellamaraju. “I’m not surprised by that. Actually doing it is the big thing so I’ll definitely have a lot of confidence going into the rest of the events.”

The top Quebecer was Keven Fortin-Simard who finished in a tie for fourth. The Chicoutimi native was loudly cheered by the gallery every time he hit a good shot.

“Ya it was great,” said Fortin-Simard who had four birdies in the final round. “It’s not something that you come here and expect to get that many cheers. I had the chance to see a bunch of people I haven’t seen for a while that made the trip here to see me play so I’m definitely grateful for that.”

The next tournament on the Mackenzie Tour-PGA TOUR Canada schedule is the Osprey Valley Open at TPC Toronto which will take place the week of August 16th-22nd.

“It was awesome. All the volunteers and the fans – those last couple of holes were really loud. I haven’t had that in a long time so it was good to get the mojo and kind of feel that again .” –Brendan Leonard on the support from the gallery

“I got off to a really hot start and then in the middle I lost a couple shots out there and really finished strong. I made three birdies on my last five holes so I just stuck to my gameplan and ended up winning.” –Brendan Leonard

“My play was good, just not good enough to take the trophy home. I made up some ground, not enough, but it felt good to do so.” –Keven Fortin-Simard

“A little bit upset but I knew it was the first hole, there’s 17 more holes. I just had to stay patient. I knew I was playing well all week, I just needed to avoid the simple mistakes because the pins were tough.” –Sudarshan Yellamaraju on his first hole bogey

Overcast and calm. High of 20. Wind N at 3 kpm. Gusts in the afternoon reached 5 kph.