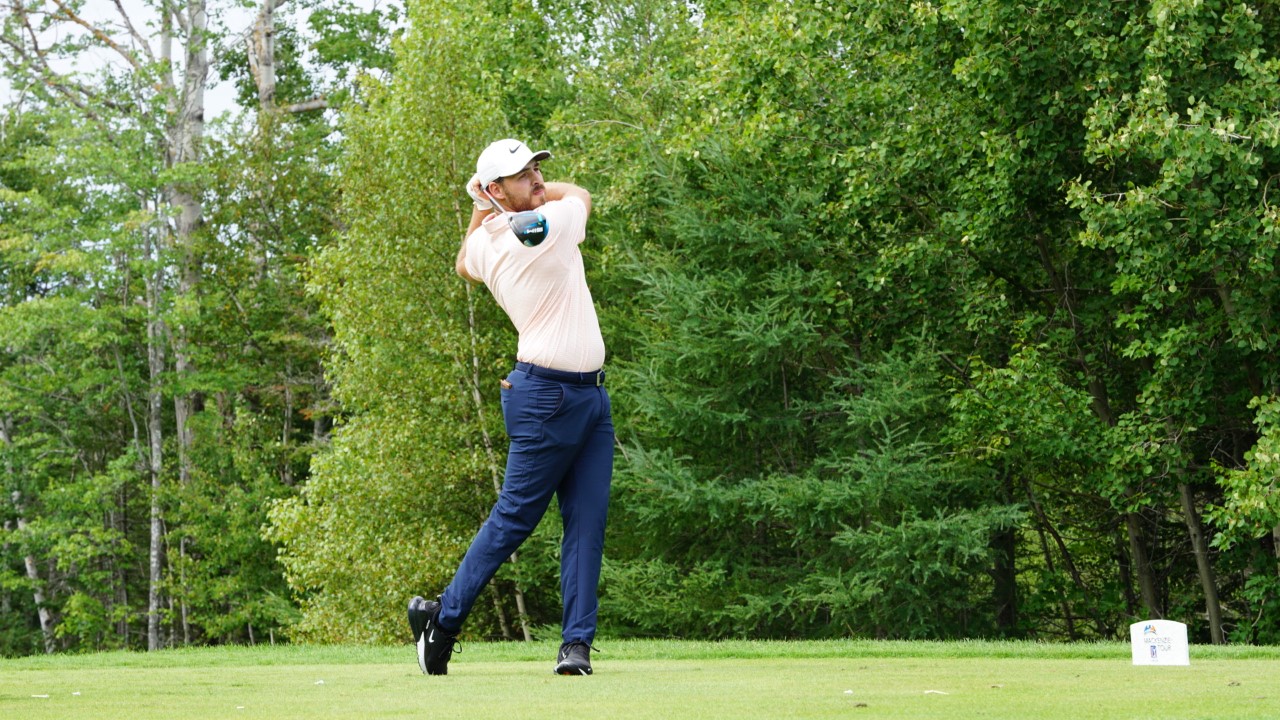 Brault takes the lead at the PEI Open

CARDIGAN, Prince Edward Island—Etienne Brault charged out of gate Friday, collecting four birdies over the first eight holes and scoring a 32 on the front nine. Things were not as easy on the back as the Mercier, Quebec, native went 1-over, with a bogey on No. 11. But his 3-under round of 69 was good enough to take a one-shot lead over Maxwell Sear, Sang Lee and Michael Blair with 18 holes remaining in the second Mackenzie Tour tournament of the season, the Prince Edward Island Open.

“I hit it really good on the front nine,” said Brault. “I made some good putts to start the round, and then I started hitting it close toward the middle of the front nine. I got a little bit colder on the back nine, and I didn’t hit it as well. It was tough in the wind, but I scrambled decently on the back, so I’m happy.”

Lee shot a clean round of 4-under 68, with four birdies. He will play in the final group Saturday, with Brault and Sear. The Calgary native avoided big numbers on his scorecard despite a blustery day here, with gusts reaching 37 kilometers per hour.

“You just had to be really committed to your shots and your yardages,” said Lee. “There were some tough lines out there, obviously, with the wind, and I was able to hit the right drives at the right time. That’s what helped me keep it in play and lead to a good round.”

“Holes that were easier [Thursday] were tougher today,” said Brault. “It was just getting the strategy right before starting, but, yeah, it was a grind out there.”

Ancaster, Ontario’s Michael Blair didn’t fare as well in the tougher conditions on Dundarave, finishing with a 1-over 73, but he remains in the mix just one shot behind Brault heading into Saturday’s final round.

“I scraped it around a bit out there,” said Blair. “It was windy and playing hard, so I just stayed as patient as possible and knew that nobody was going to run away with it. As long as I hung in there around even-par, I knew I was probably going to be all right at the end of the day.”

Callum Davidson of Duncan, British Columbia, sits alone in fifth place (7-under). Three are tied for sixth, at 6-under.

“Starting the day, if somebody had told me I’d score a 69 in 40-kilometer gusts, I would have taken it all the way.” –Etienne Brault on playing well in the windy conditions

“My best stretch was probably saving pars in the middle that kept my round going. I had to punch out and made a 20-footer for par that kept my momentum going. I made some good up-and-downs after short-siding myself. I was more proud of that stretch than the birdies.” –Sang Lee

“I’m putting it well right now. I’m able to read the greens pretty good, so I think as long as I give myself chances, and not force things, I should be able to make some putts. That’s the goal [Saturday].” –Sang Lee

“There are a few tees that they moved up, trying to entice guys to be more aggressive. The one hole was drivable on eight. I had a couple of other opportunities where I could have [gone] for the hero shot, and I resisted because I knew that could lead to big numbers on the scorecard. I really just stayed patient and hit the smart shots” –Michael Blair

Partly cloudy and windy. High of 24. Wind NW at 25 kph. Gusts in the afternoon reached 37 kph.