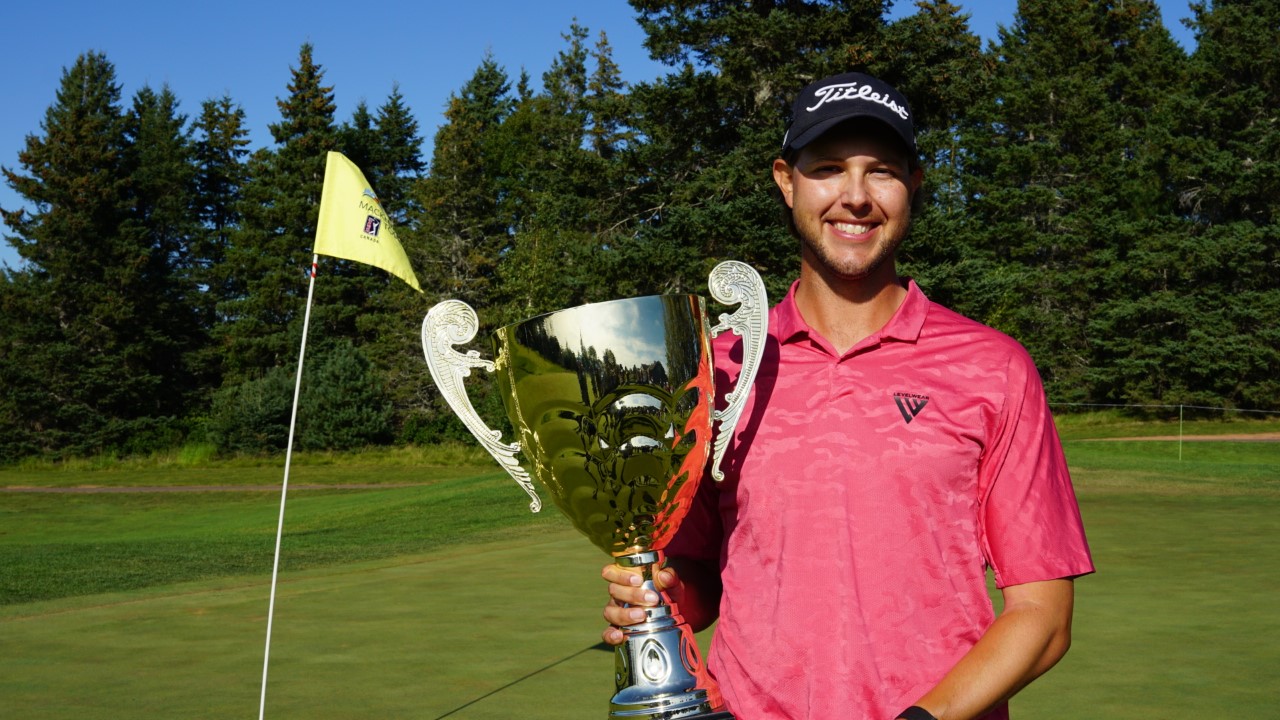 Blair wins in a playoff at the Prince Edward Island Open

“It was just staying patient, especially with the conditions as tough as they were,” said the Ancaster, Ontario, native who shot a 1-under round of 71 to finish regulation at 9-under. “It was blowing 45 (kph) out there today so it was just really committing to every shot as much as possible and then just letting whatever happens happen after that. You can’t do much when it’s blowing 45 after it leaves your clubface. It’s up to the golf gods basically.”

The golf gods were smiling on Blair. The 29-year-old came up short with his approach shot on the first playoff hole, the par-5 18th—his wedge-shot approach landing in the deep bunker guarding the green.

“I hit that shot in the practice round so I knew I could get out somewhere on the green,” said Blair. “I just tried to get it out and give myself a putt. I just didn’t want to leave it in there to be honest.”

He was left with a six-footer for birdie and made no mistake.

“It looked pretty straight to me; just dying a bit to the right,” said Blair who admitted to changing his putting stroke this week. “All I tried to do was make sure I made solid contact and see what happens. I was lucky enough to catch the right side there and drip it in.”

That put the pressure on Sear, who was also on the green in three shots after chipping out of deep rough on a steep incline leading down toward the bunker where Blair escaped. The Victoria, BC, native was left with a five-footer, but his putt just burned the left edge, failing to drop.

Despite the heartbreaking loss, Sear is focusing on the positives of a second-place finish.

“Obviously it was really tough conditions,” said Sear, who also shot a final-round 71. “To be able to grind it out like that, It’s kind of my game. Hopefully it helps me down the road, and, yeah, just keep trucking right along here.”

Camrose, Alberta’s Andrew Harrison finished in third place, at 7-under—two strokes out of the playoff. Blair Bursey (6-under) of Gander, Newfoundland, ended up alone in fourth.

“It was just a lot of concentration on every shot and just focusing on what you’re trying to do out there.” –Michael Blair on the windy conditions

“I did change my putting grip this week. That was really the only change, but you know in terms of mindset, swing and gameplan, I’ve just been plugging away. I was thinking the results would come eventually, and they finally did.” –Michael Blair

“I had a ton of those all day, and I made a lot of them to get myself into that position. I was just happy to be there. It was either going to go in or it wasn’t. I guess I’ll just try again next time.” –Maxwell Sear on missing his putt on the first playoff hole