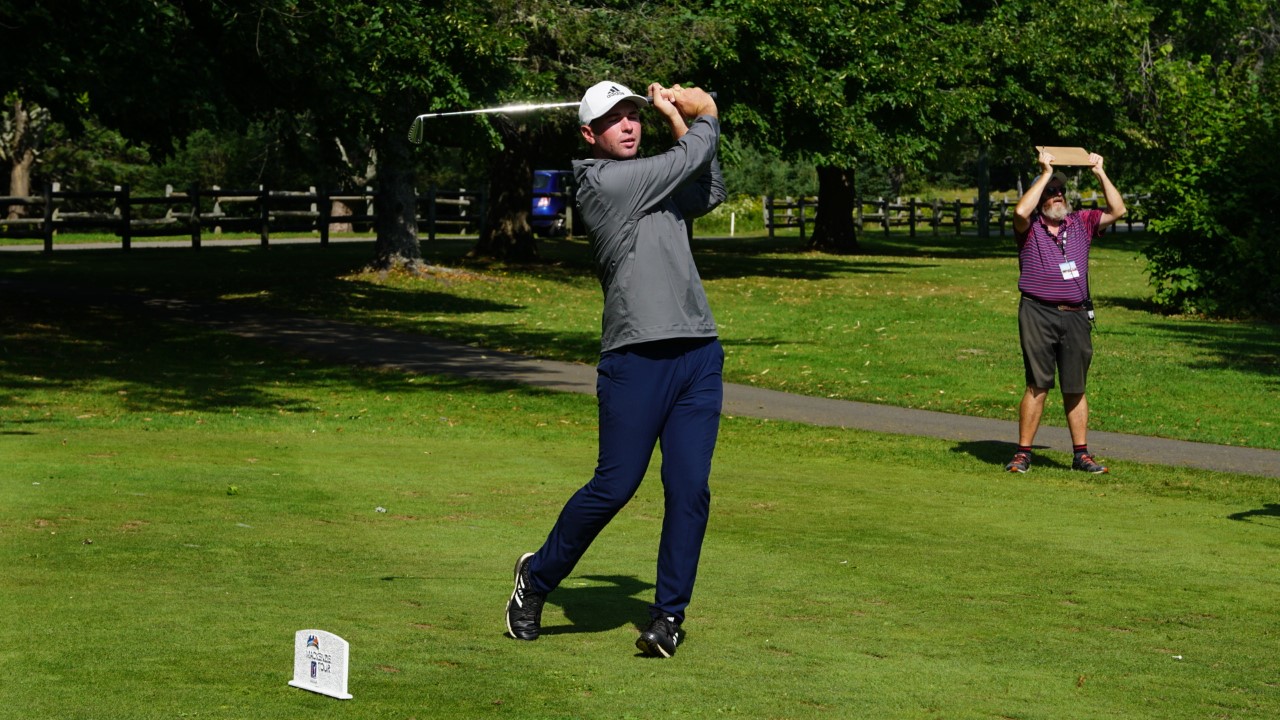 Nine-birdie round vaults Davison into the lead on the Island

CARDIGAN, Prince Edward Island—Callum Davison birdied his first hole of the day and didn’t stop there. The Duncan, British Columbia, native made nine birdies, shooting an 8-under round of 64 to move into a one-shot lead over Baptiste Mory after two rounds of the Brudenell River Classic. Anthony Brodeur and amateur Noah Steele are tied for third, two shots behind Davison’s 10-under pace.

“The last two days I’ve hit it in the fairway; that’s probably the toughest thing about this track,” said Davison who is the only player on the Mackenzie Tour – PGA TOUR Canada using a cross-handed grip on his full swings. “I’m making putts, which is nice. That wasn’t the case last week. I spent a lot of time between events working on that.” After capturing Forme Tour medalist honors at The Home Course in suburban Tacoma, Washington, Davison failed to make a cut on that circuit in five starts. His fortunes have changed so far in Canada.

After ending Tuesday’s action tied for second place, Quebec City’s Mory followed a 65 with a 4-under 68 to sit alone in second, one shot back.

“On my front nine, I played very well,” said Mory, who started on the back nine and made an eagle on No. 11 to go along with three birdies. “My long game was perfect, and I made the small putts that I had. During the back nine I didn’t play well at all, but I made a lot of very good up-and-downs.”

Osprey Valley Open champion and Golf Canada National Amateur Team member Steele, No. 3 on the Points List, birdied three of his last four holes to get to 10-under. The Kingston native tied for third with Oshawa’s Brodeur, who was 3-under on Wednesday on the strength of three birdies and an eagle.

“I made a few mistakes here and there today, but I thought overall, it was a pretty solid round,” said Brodeur. “I didn’t hit it as well as [Tuesday], but I was pretty happy to get into the house at 3-under.”

Four players are tied for fifth, at 9-under, including Prince Edward Island Open champion Michael Blair. He is looking to make it two straight wins in the Maritimes.

Tee times for the third, and final round, at the Brudenell River Golf Course has been moved to 7 a.m., AST due to the threat of inclement weather expected.

“I’m hitting my 3-iron really good, so to get it in the fairway with that has been huge. The putter’s been better than last week so if I can just keep that up (Thursday), I should be fine.” –Callum Davison

“I think it’s great. I played a couple courses like that growing up. It gives you a lot of opportunities, and then you have to bear down on the par-3s; make sure you’re making pars, and if you miss greens you have to make sure you’re making up-and-downs.” –Anthony Brodeur on the layout of Brudenell River Golf Course that features six par-5s, six par-4s, and six par-3s