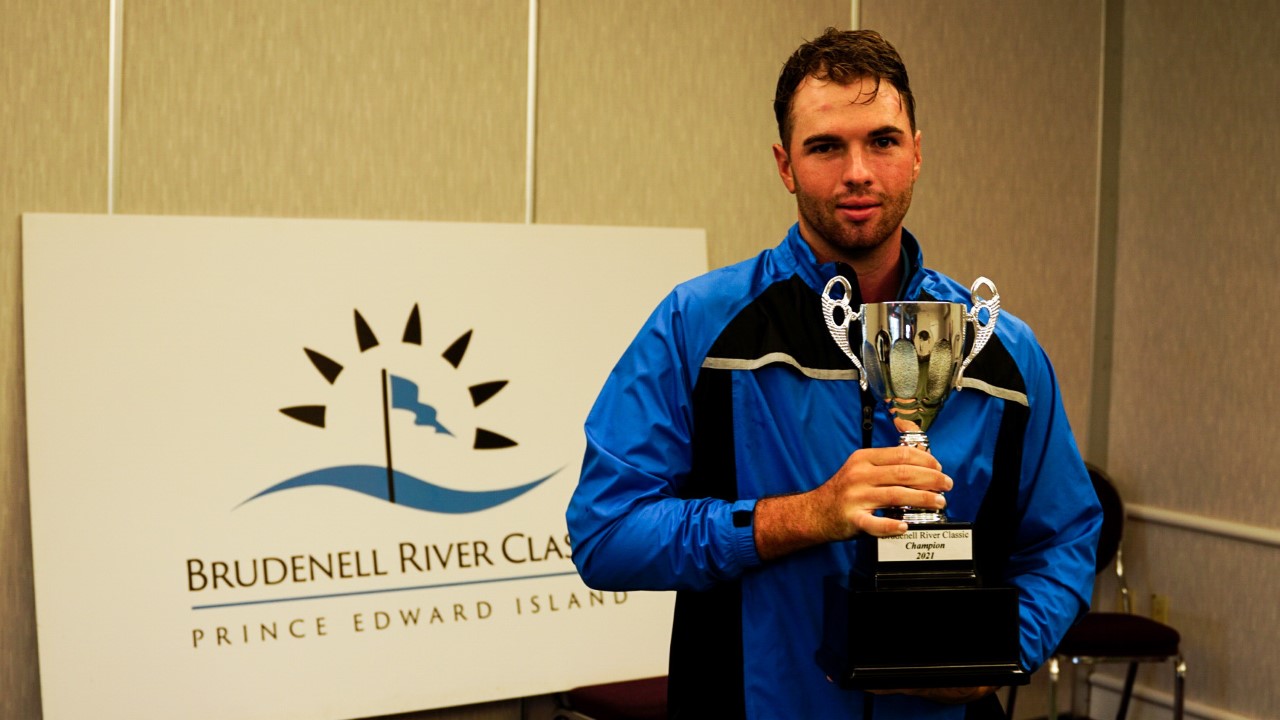 Davison battles the elements to best the field at Brudenell

The Duncan, British Columbia, native shot a final-round of 3-under, 69 to finish the tournament at 15-under, one shot better than Golf Canada Amateur Team member Noah Steele.

“It feels great,” said Davison, the only player on Tour to employ the unorthodox cross-handed grip on full swings. “I hit it great off the tee all week, so that was huge. I’ve been struggling with that this season, and I just made some putts when I needed to.”

Steele, of Kingston, was looking for his second consecutive victory after winning the Osprey Valley Open at TPC Toronto two weeks ago. He finished with 4-under 68, just falling short of forcing a playoff.

“If you would have told me that 4-under par was what I would have signed for, I don’t know if I would have believed you,” said Steele. “I didn’t hit it amazing, but I just managed really well and just grinded away and stayed in it. So, I’m proud of that.”

It rained all day at Brudenell River Golf Course, intensifying on the back nine as the lead groups came down the stretch. The grounds crew employed squeegees on the last few greens as puddles began to form.

“After (No.) 12 it was terrible,” said Davison of the weather as he bogeyed two of his last three holes. “I was just trying to make contact. If you miss it, at least miss it in the right areas so you can at least try to make a par. By the time we got to 17, it was not really very playable. I’m just glad on 18 all I had to do was make a six (to force a playoff).”

“It was a mess, and just got progressively worse,” added Steele. “We got to start the day without really much (rain) at all, and it would start and stop, and then it just got progressively harder and harder. Those last four holes, you kind of lost it. You couldn’t keep anything dry anymore, clubs were slipping, and it was getting pretty messy.”

John Williams finished alone in third place, at 11-under, while four ended at 10-under, tied for fourth.

“The birdie putt I made on 15 was big because I thought that would give myself a little bit of a bigger lead coming in on the last three.” –Callum Davison

“I would have picked up my ball if I was playing for fun.” –Callum Davison on the heavy rainfall in the final round

“I was struggling on the Forme Tour and was going to lose my card anyway. I was just going to play one event up here, but since they were so close together and I was already here, I decided to play the second one.” –Callum Davison

“Now my goal is to make the top five on the Mackenzie Tour – PGA TOUR Canada.” –Callum Davison

“I proved a lot to myself in Toronto, so just coming out here for a new week and a clean slate, I just wanted to continue that play the best that I could. There’s a lot to gain from the last two tournaments for sure.” –Noah Steele on his first and second place finishes in two starts

Rain throughout the day, heavy downpours during the final hour of play. High of 22. Wind NE at 9 kph. Gusts in the afternoon reached 19 kph.