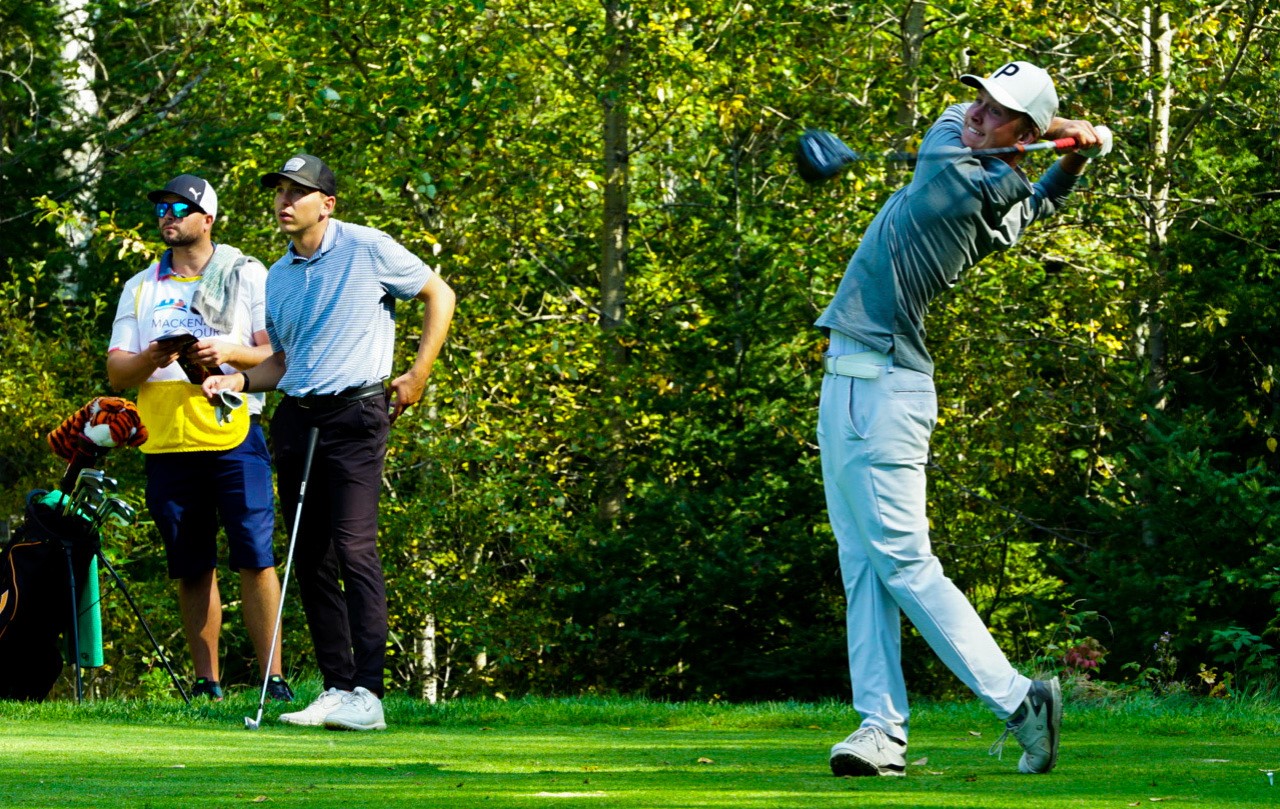 Five tied for the lead; Saskatoon teenager one shot behind at Elk Ridge

WASKESIU LAKE, Saskatchewan—Seventeen-year-old Alex Swinnerton stole the show in Thursday’s opening round of the inaugural Elk Ridge Open. The grade-12 student at Centennial Collegiate High School in Saskatoon shot a 2-under round of 68, tied for second place, one shot off the lead held by a quintet of players—Canadians Brendan Leonard, Blair Bursey, Raoul Menard and Sang Lee and American Franklin Huang. Swinnerton is tied with pros Travis Fredborg, Linus Lo and Michael Blair.

“I definitely didn’t know what to expect,” said Swinnerton. “I’m super happy; putts were falling, and I was hitting the driver well. On some of the holes, guys were hitting 3-irons, and I decided to hit my driver just because it felt good.”

Swinnerton, an employee of Waskesiu Golf Club in Prince Albert National Park, has played Elk Ridge a few times and took advantage of his course knowledge.

“Yeah, it definitely helps,” said Swinnerton. “Obviously I don’t know it was well as Waskesiu, but just being in the tree-lined atmosphere like Waskesiu helps a lot.”

As one of the leaders, Bursey, the Gander, Newfoundland, native has finished in the top 10 in the first four Mackenzie Tour – PGA TOUR Canada tournaments this season.

“I’ve just been pretty consistent with my work habits, with my practicing and training,” said Bursey. “Hopefully I can keep that going and knock something off here to finish off the back half of the season.”

“I was just hitting good shot after good shot and keeping it in play,” said Menard, of Angie-Gardien, Quebec. “I tried to hit fairways and greens and get the putter going. I gave myself a lot of chances and was able to scramble well when I missed the greens.”

“I definitely think I can stay in it. I don’t have too high of expectations right now. I just came in here wanting to play well, and it’s a good start.” –Alex Swinnerton

“I went birdie-birdie to start the back nine so I kind of knew I had something going.” –Alex Swinnerton

“I really liked how I controlled my golf ball today. We got a little bit of wind here later in the round, and I held in there OK with my ball-striking.” –Blair Bursey

“It definitely places a premium on accuracy. There aren’t many drivers here. I personally think that iron play is kind of the big thing around this place. Generally, that suits me pretty well, and I look forward to showing that over the next couple of days.” –Blair Bursey on Elk Ridge Resort’s Aspen/Birch Course

“The greens are in perfect condition. You just have to figure out your line.” –Raoul Menard

“I love it. You’re right here in nature, and we’re definitely in Canada, no doubt about it. I can’t say anything wrong about this place. It’s a lovely spot, and I really didn’t even know it existed so I’m happy to learn about it.” –Raoul Menard on Elk Ridge Resort