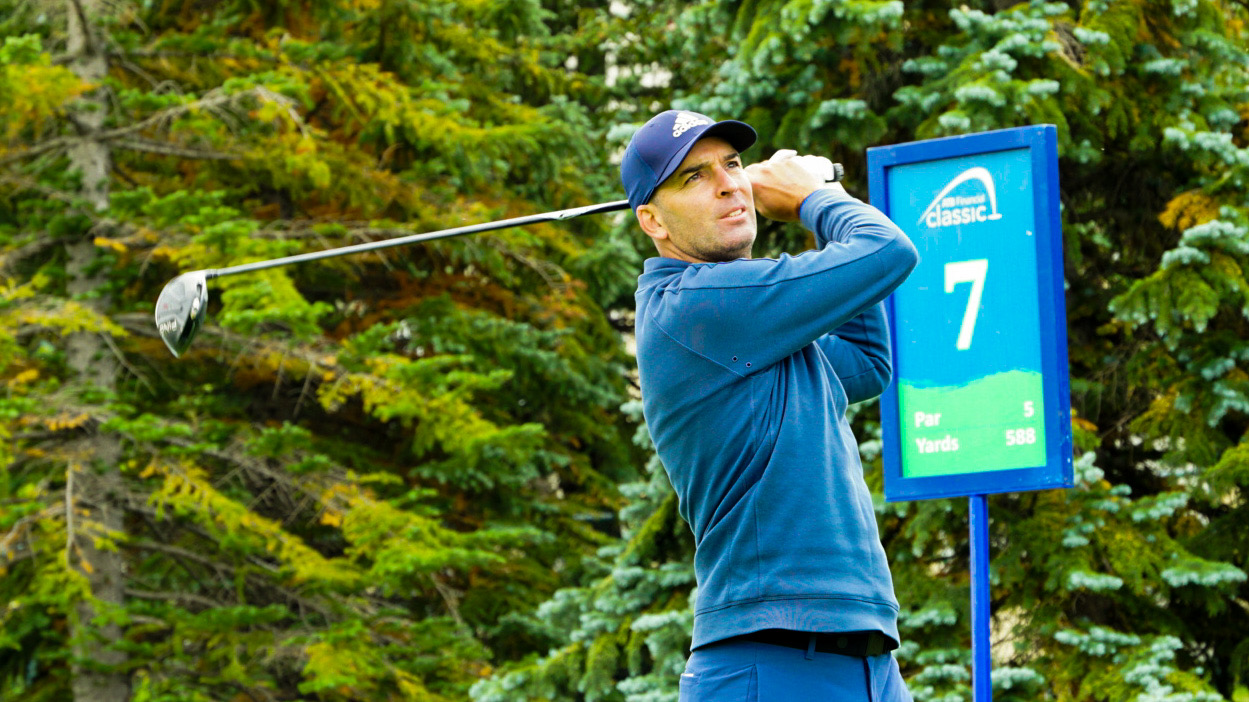 CALGARY, Alberta—Wes Heffernan’s putter was on fire Friday in the second round of the ATB Financial Classic. The Calgary native rolled home nine birdies over a 12-hole stretch in the middle of his round, finishing with a 7-under, 64. Heffernan’s performance gives him a three-shot lead over Jared du Toit, Riley Fleming and Will Barnett heading into the weekend.

“It definitely means a lot to me,” said Heffernan on playing well in his hometown. “I’ve played well (at Country Hills Golf Club) a lot, and I’ve played a lot of tournaments here. It is only 36 holes, though, and there are still 36 holes left, so I’ll keep having to play the way I have been.”

After racking up his ninth birdie of the day, a 20-footer on No. 6, his 15th hole of the day, Heffernan commented, “I’ve never made putts like this in my life.”

“It was one of those zones that you get into when you just kind of blank out for 12 holes,” continued Heffernan. “You just see the line, perfect speed, and every putt I made was right in the middle of the hole, which was pretty cool.”

Du Toit, a fellow Calgary native, shot a 2-under round of 69, including a birdie on No. 9, his final hole of day, just before officials suspended play due to darkness.

“It wasn’t coming as easy today,” said du Toit. “The conditions were easier, but the pins were tougher. A lot of positives heading into the weekend, and I’m happy to be in the mix.”

After shooting a 64 of his own in the opening round, it was more of grind for Barnett, who shot a 1-under round of 70. The Aussie encountered some back luck on No. 18 when his ball got caught on a sprinkler head instead of rolling down toward the pin, leading to a bogey finish.

“I slightly pulled my 8-iron from 182 yards,” said Barnett of his uphill approach on No. 18. “It looked like it was coming in on the bowl, and I get up there and it’s in a sprinkler head just over the back of the green. The best I could do from there was 25 feet (to the pin), with all the slope on the green. It was an unlucky break, but I just have to deal with it.”

“I still have a lot to work on ball-striking-wise because I’m not going to putt like that the rest of the way. It would be fantastic if I did, but that’s just not the way golf works. I’m just going to have to hit it better the last two days, for sure.” –Wes Heffernan

“I have had rounds like this before. Usually it’s because I’ve ball-struck it really well, and today it was just the putter.” –Wes Heffernan

“Our group was out of whack, and we all bogeyed No. 8, rushing to get it in; but very happy to do so. It buys us three or four hours of sleep [Saturday].” –Jared du Toit on finishing his round just before officials suspended play due to darkness.

“It was definitely more of a grind out there today. I didn’t hit it quite as well. I still struck it solid, but some of those putts I was making [Thursday] just weren’t dropping today. Scraping out a 70 and not holing a lot, I’m pretty happy with that.” –Will Barnett

Cool and partly cloudy before warming in the afternoon. Frost delayed play by 60 minutes in the morning. High of 19. Wind SW at 16 kph. Gusts in the afternoon reached 30 kph.