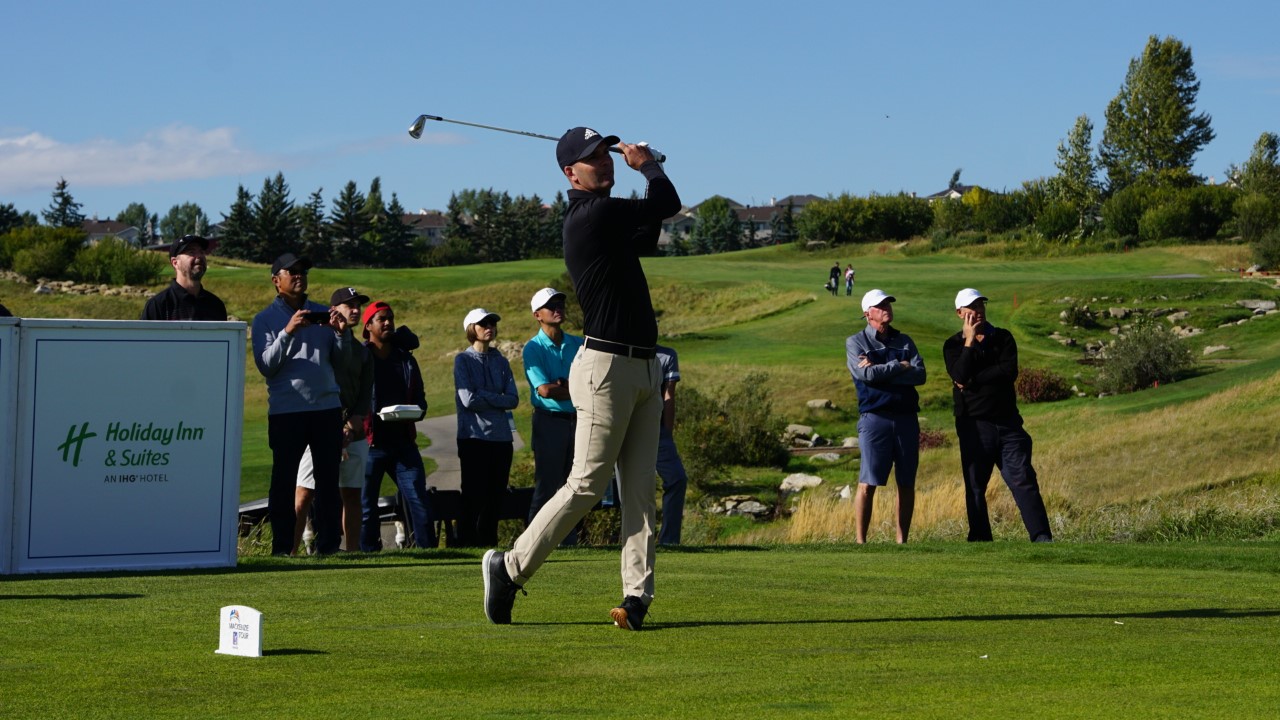 CALGARY, Alberta—With the wind blowing at Country Hills Golf Club, the third round of the ATB Financial Classic was much more of a challenge Saturday, with Wes Heffernan and Will Barnett tied for the lead at 10-under par, two shots ahead of Samuel Anderson.

“Pretty much our entire round, [the wind] was there,” said Heffernan of the wind that howled more than 40 kilometers per hour in the afternoon. “Obviously, compared to [Friday] when it was pretty calm, it’s a completely different golf course, so you’re hitting different shots and you’re out of your comfort zone right away.”

The Calgary native battled his way to a 1-over round of 72, with five birdies, despite three-putting four times.

“I drove it fantastic today,” said Heffernan. “The ball-striking was pretty good other than the two tee shots coming in on the last two holes. Those four three-putts were the difference between a 72 and a 68, and a pretty good score.”

Australia’s Barnett, who makes his home in British Columbia, collected two birdies in his round and an eagle from the bunker on No. 13.

“I’m super happy with the way I played today,” said Barnett. “I grinded pretty hard and hit it pretty solid. On Nos. 16 and 17, I narrowly missed some short birdie putts, which could have gone in. But I’m 10-under and tied for the lead, so I’m extremely happy with where I’m at going into the last round.”

Anderson will join Heffernan and Barnett in the last grouping Sunday after shooting a 1-under round of 70. The American kickstarted his day with an eagle on No. 2 before adding three more birdies.

“It’s always great when you can put yourself in contention heading into the final round,” said Anderson. “It’s going to be fun [Sunday]. I’ll just try to get after it and stay in position, and just keep doing the things I’ve done the last three days.”

Calgary native Jared du Toit sits alone in third, at 7-under, while Caledonia, Ontario’s Craig Stefureak holds down fifth place, at 6-under.

“It was one of those days where you just try to survive and post some sort of score. I’m not super happy with 72 just because of those four three-putts, but at the same time, I’m still tied for the lead.” –Wes Heffernan

“Play for your pars and if you hit one close, try to take advantage. The wind was so strong today, it was affecting the putting, so it was tough to make some putts.” –Will Barnett on his third-round strategy

“The crowd was nice, but it was very clear that there was a strong following for the other two guys. Me being from Australia and living in B.C. now, and B.C. and Alberta having a little bit of a rivalry, that’s something to take into account.” –Will Barnett on playing with Calgary’s Wes Heffernan and Riley Fleming of Airdrie, Alberta

“I don’t know if I hit a full shot, or a stock shot all day. I felt everything was a flighted or a punched shot, or really just trying to maneuver the wind in some way, shape or form.” –Samuel Anderson