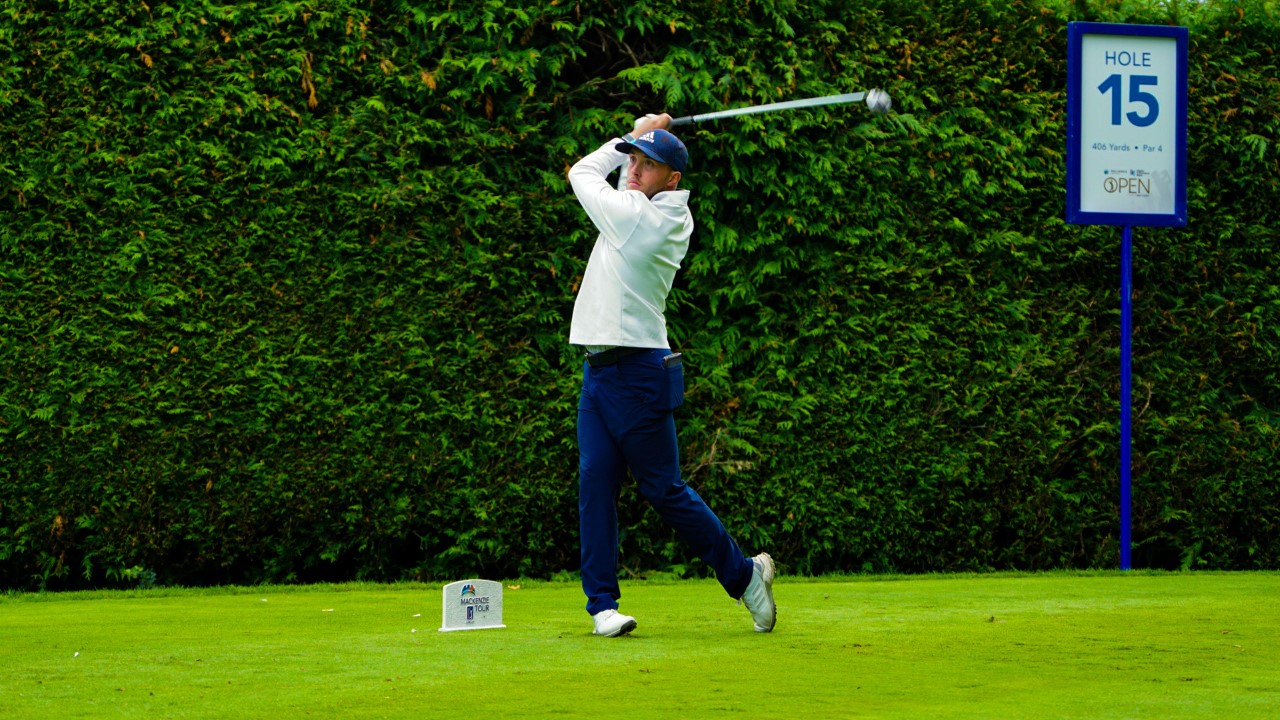 VICTORIA, British Columbia—Blair Bursey shot a 3-under round of 67 and is in the driver’s seat heading into the final round of the Reliance Properties DCBank Open, the season-ending Mackenzie Tour – PGA TOUR Canada tournament. The Gander, Newfoundland, native recorded five birdies on the afternoon, including a three-foot putt on No. 18, to build a two-shot lead over Jeevan Sihota and Andrew Harrison with 18 holes remaining.

After top-10 finishes in each of the first four tournaments of the season, a win for Bursey on Sunday would guarantee him a spot in the top five on the Points List and exempt status for the 2022 Mackenzie Tour season up to the first reshuffle.

“I’ve got a job to do [Sunday],” said Bursey. “It would be nice to put in a good body of work for the whole summer, but I’ve got to take it one step at a time here.”

Seventeen-year-old and Victoria native Sihota continues to impress. The Golf Canada Under-18 amateur team member shot a 2-under round of 68 with two birdies. He will play in the final group Sunday.

“I’ve stayed very patient, waited for my opportunities, and eventually they dropped at the end today,” said Sihota of his work on the greens. “I know my swing really well, and I know I can hit the shots to go low.”

Rounding out the final group is Andrew Harrison. The Camrose, Alberta, native tied for the low round of the day with a 6-under, 64, highlighted by seven birdies and an eagle.

“I was putting really well,” said Harrison. “It kept me in there all day. I hit a few good shots out there, as well, but when things were a little shaky out there in the middle of the round, I holed some putts to keep it together.”

Aurora, Ontario’s, Marc Casullo sits alone in fourth place, at 8-under, with a trio of golfers tied for fifth, at 7-under: Delta, British Columbia’s Yi Cao and Jonnie Motomochi, along with Calgary’s Kent Fukushima.

· The third round was completed on Saturday morning, with the cut set at 4-over.

· Seven amateurs made the cut, including Jeevan Sihota and Kingston’s Noah Steele, who sits in second place on the Points List.

· Blair Bursey, Jeevan Sihota and Andrew Harrison are the only three golfers to shoot all three rounds in the 60s.

· Yi Cao, a native of China, tied Andrew Harrison for the low round of the day. Cao shot a 6-under, 64. His day included seven birdies.

· Twenty-three players shot under par in the third round.

“I was fortunate to make a couple putts. One was from off the fringe and one from outside of 30 feet. I just really hung tough, and as soon as I got out of position, I had to use some discipline to not try any hero shots.” –Blair Bursey

“They’re far away, and there’s a big time change this week but it’s cool. It’s nice to see that they gravitate toward what I’m doing. They like to follow along, and they’re very supportive. It definitely makes me feel good.” –Blair Bursey on the support he receives from fans in Newfoundland

“That’s actually one of the best scrambling rounds I’ve ever seen in my life. That was amazing.” –Jeevan Sihota on Blair Bursey’s third round

“I’m really comfortable on these greens. It’s the type of grass that I like putting on. They’re perfect right now.” –Andrew Harrison on Uplands Golf Club