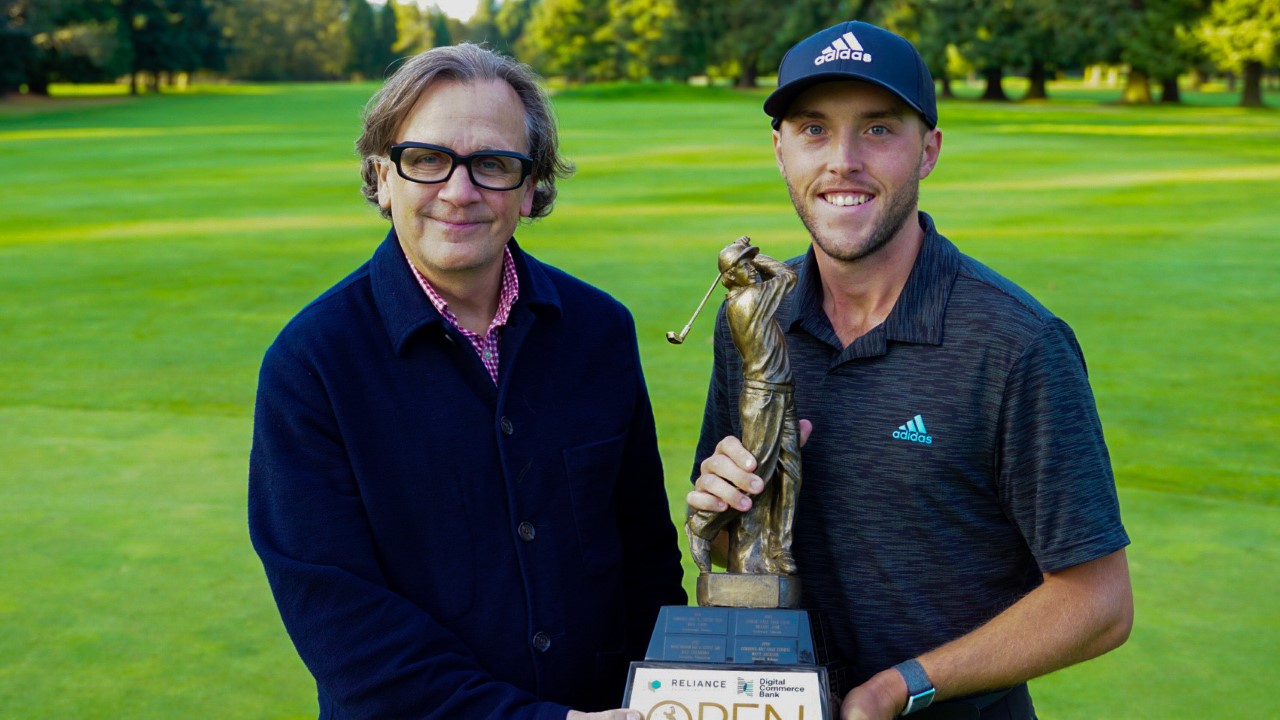 Bursey victorious at the Reliance Properties DCBank Open in Victoria

VICTORIA, British Columbia—Blair Bursey grinded his way to a 1-over round of 71, and it was good enough for him to hang on for win at the season-ending Reliance Properties DCBank Open at Uplands Golf Club. The Gander, Newfoundland, native finished at 10-under, claiming a one-shot victory over a quartet of players after recording four top-five finishes earlier in the Mackenzie Tour – PGA TOUR Canada season.

“It’ nice to get the rewards of the hard work,” said Bursey who finished the season in second place on the points list. “A lot of close calls but it feels really nice, and satisfying, to pull this one out despite having some difficulties over the last few days.”

Four players tied for second—amateur Jeevan Sihota, Andrew Harrison, Jonnie Motomochi and Yi Cao. Harrison, the Camrose, Alberta, native shot an even-par round of 70, and had a chance to force a playoff on No. 18, but his birdie putt came up one rotation short of falling into the hole.

“It’s definitely kind of heartbreaking,” said Harrison. “I gave myself a good look there, straight up the hill, and I just forgot to hit it. It’s frustrating for sure right now, but I’m proud of how I played today, and I fought as hard as I could out there.

Sihota of Victoria, only age 17, finished as the top amateur this week.

“It was a good week,” said Sihota who is a member of the Golf Canada Under-18 national team. “Obviously it hurts a little bit but to come up one shot short, but it was a good week and I scrambled well today to keep myself in it.”

Sunday’s final round at Uplands Golf Club also capped a run of seven consecutive weeks on the road for many of the players, including Bursey.

“This was a huge step forward for my development, and probably for a lot of other guys too,” said the lefthanded Bursey. “When you’re playing in consecutive weeks, you find out a lot about yourself and your game. It will really help with preparation as we move forward in our careers.”

Two Ontario golfers, Craig Stefureak of Caledonia, and Aurora’s Marc Casullo, tied for sixth place, at 8-under, along with Etienne Brault of Mercier, Quebec.

“I had to have a bit of awareness that I didn’t have my best stuff today. Regardless, I still had to find a way to get the ball in the hole. It was probably more of a mental battle than a physical one.” –Blair Bursey

“I want to say thanks to my friends and family back home. I’m as far west as I can be right now, and I know back east everyone is really excited, so I just want to say thanks to everybody that has supported me since day one.” –Blair Bursey on the support from his hometown in Gander, Newfoundland

“I just have to keep grinding. The little things matter, for sure. Just like one or two shots and sometimes just one bad shot can cost you a tournament.” –Jeevan Sihota on what he learned this week